Accruit
While on the campaign trail, Barack Obama made greening America's infrastructure a huge priority for his administration. As noted in the Los Angeles Times, Obama planned to spend $150 billion over the next decade to promote energy from the sun, wind and other renewable sources as well as energy conservation. Plans include raising vehicle fuel-economy standards and subsidizing consumer purchases of plug-in hybrids. Obama wants to weatherize 1 million homes annually and upgrade the nation's creaky electrical grid. His team has talked of providing tax credits and loan guarantees to clean-energy companies. His goals: create 5 million new jobs repowering America over 10 years; assert U.S. leadership on global climate change; and wean the U.S. from its dependence on imported petroleum. 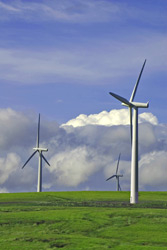 While on the campaign trail, Barack Obama made greening America's infrastructure a huge priority for his administration. As noted in the Los Angeles Times, Obama planned

to spend $150 billion over the next decade to promote energy from the sun, wind and other renewable sources as well as energy conservation. Plans include raising vehicle fuel-economy standards and subsidizing consumer purchases of plug-in hybrids. Obama wants to weatherize 1 million homes annually and upgrade the nation's creaky electrical grid. His team has talked of providing tax credits and loan guarantees to clean-energy companies.

America's energy industries understand the need to green their operations. According to the American Petroleum Institute, US oil and natural gas industry companies are investing more than all of private industry and the federal government combined in new energy technologies to meet future energy needs.

With this in mind, let's illustrate the case of ABC Energy. Imagine that ABC is a large firm (market cap of $175 billion) that currently focuses on oil and natural gas exploration, development, production and distribution. Like every other energy company in America they can see the writing on the wall and realize that if they're to be successful in the long term that they must evolve from an oil company into a full-spectrum energy company. As a result, they're already investing significantly in renewables.

They believe that this evolution will happen over X years at a cost of Y. But what are the values for X and Y? There's going to be tremendous political (and consumer) pressure to shorten X, but these are balanced against the obvious business pressures to mitigate Y. Part of the transition will be accomplished organically, as old assets are retired, and tax credits can also ease the burden some. Of course, in the current political climate, most legislators will be eager to steer clear of "tax breaks for Big Oil" stories.

The upshot is that Y will remain too high to spur a quick transition.

Now, let's consider what might happen if the tax reform proposed here were enacted. (In a good-faith attempt to make the scenario as plausible as possible we're going to use what we believe to be very conservative numbers.)

ABC is one company, and while they're big they're hardly the largest (they're roughly half the size of ExxonMobil). On a revenue basis, ABC represents a little over 2% of the US oil and gas sector's revenues for 2008, so if we assume that its profile is more or less average by industry standards, this proposal could potentially unleash more than $600 billion for green energy development.

At this point, let's remember two things. First, we're aiming low. Second, at this point we're still only talking about the oil and gas sector - to get the full impact of this proposal you'd also have to factor in a similar transition by coal companies.

We're still trying to nail down the math on the scenario presented above, but we feel comfortable that what is described is in the right ballpark, and are continuing to work on firming up the actual industry numbers. Thanks for tolerating the fuzzy math, and if you're able to help us tighten up the scenario, please let us know.

What Are the Potential Objections?

In imagining how we might get an idea implemented, we have to consider what barriers would stand in the way. A few objections have occurred to us, but so far there are very good answers to each. Let's take them one at a time.

1: Such a change would be very difficult to implement. Not necessarily. The standard route for amending the tax code runs through Congress, obviously, and that's always a complex process. However, the IRS has tools at its disposal that could potentially expedite fossil-to-green exchanges, at least in the short term. One is called a Private Letter Ruling (PLR). "The IRS private letter ruling is applicable to that tax situation and that taxpayer only." However, PLRs are often treated as precedent, and there's no reason to think that one couldn't be used to signal to energy firms that the agency is ready to accept fossil-to-green exchanges as eligible for 1031 by virtue of "same use" status. The second (and more powerful) approach could involve the use of a Revenue Ruling.

2: What is proposed can be done already. This is true in principle. ABC could, if its CPAs and attorneys agreed that it was a defensible move, go ahead and execute such an exchange and then make their case before the IRS on audit. However, this is risky - they could potentially be exposed to the full tax bill plus penalties if they failed to convince the IRS. If companies have done this in the past (or are doing it currently) we're not aware of it, and at the very least it's likely that the risk noted here would serve as a significant barrier for any energy company.

3: There will be major public and political resistance to "tax breaks for oil companies." While there certainly might be such a response, this program is very explicitly not a tax break for oil companies. Three reasons:

To this equation add add the tax revenue implications associated with the creation of all those green collar jobs and the ripple that a half-trillion dollar development spree would set off in support and peripheral markets.

As a result, this seems like an idea that would be a win for both major parties (and even the Libertarians and Greens). Objections might be voiced, but at this point it seems like there are solid answers to them.

There are obviously a number of gaps that need filling in, and there may well be a strong argument against that hasn't occurred to us yet. Hopefully our readers can help us vet the idea and decide whether it's something that needs to be pursued more aggressively.